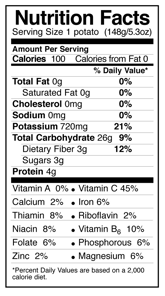 The potato is a near perfect food. Nutrient dense, it is an important dietary staple in over 130 countries.

The US Department of Agriculture has stated that “a diet of whole milk and potatoes would supply almost all of the food elements necessary for the maintenance of the human body.”

A single medium-sized potato contains about half the daily adult requirement of vitamin C, while other staples such as rice and wheat have none. The potato itself is 99.9 percent fat free. Boiled, it has more protein than maize, and nearly twice the calcium.

Potatoes can have 600-800 mg of potassium, about 40 percent more than a banana. Potassium is essential to the body because of its role in attaining optimal muscle performance and improving nerve response to stimulation. Iron, essential in helping the body convert food to energy as well as resist infection, is also found in potatoes.

One would expect potatoes to have minerals, as they spend their life underground. But potatoes are also a great source of vitamins, even supplying vitamin C, which is essential to help maintain healthy connective tissue and heal wounds. Potatoes are also good sources of B vitamins, helping the body make healthy red blood cells and amino acids.

An average potato (approximately 5.3 oz) with the skin contains:

Potatoes with the skin on are an excellent source of fiber. At 3 grams of fiber per serving, a potato equals or exceeds that of many whole grain products, such as whole grain bread, whole wheat pasta, and many cereals.

Despite the popular notion, the majority of nutrients are in the potato itself, not in the skin. However, leaving the skin on potatoes makes them easier to prepare and retains all the nutrients.