We typically think of sweet potatoes and yams at Thanksgiving, but these naturally sweet vegetables make a tasty and healthy addition to meals throughout the year. They are very nutritious and can be found in grocery stores year-round, however they are in season in November and December. 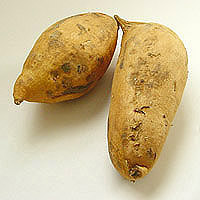 Sweet potatoes have white, yellow, or orange flesh, and a thin skin that is white, yellow, orange, red, or purple. A root vegetable, they may be shaped like a potato, (short and blocky with rounded ends) or be longer with tapered ends. The paler-skinned sweet potato has a thin, light yellow skin with pale yellow flesh which is not sweet and has a dry, crumbly texture similar to a white baking potato. The darker-skinned variety (frequently called “yam”) has a thicker, dark orange to reddish skin with a vivid orange, sweet flesh and a moist texture. 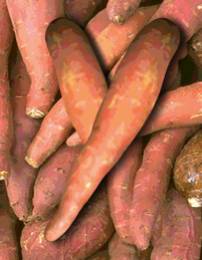 Yam tubers have brown or black skin and off-white, purple, or red flesh, depending on the variety. They grow in tropical climates, primarily South America, Africa, and the Caribbean. The yam is popular in Latin American and Caribbean markets and is slowly becoming more common in US markets. The word yam comes from African words njam, nyami, or djambi, meaning “to eat,” and was first recorded in America in 1676.

The orange-colored root vegetable often thought of as a “yam” is actually a sweet potato. After this variety of sweet potato was introduced into the United States in the mid-20th century, it was given the name “yam” to distinguish it from the white-fleshed sweet potato to which most people were accustomed.

The U.S. Department of Agriculture requires that the orange-colored sweet potatoes labeled as “yams” also be accompanied by the label “sweet potato.”

One of the oldest vegetables known to man, sweet potatoes are native to Central America. Sweet potato relics 10,000 years old that have been discovered in Peruvian caves provide evidence that they have been consumed since prehistoric times.

Christopher Columbus introduced sweet potatoes to Europe following his first voyage to the New World in 1492. By the 16th century, Spanish explorers had brought them to the Philippines and Portuguese explorers brought them to Africa, India, Indonesia, and southern Asia.

At about the same time, sweet potatoes began to be cultivated in the southern United States, where they continue to be a staple food. In the mid-20th century, the orange-fleshed sweet potato was introduced to the United States and given the name “yam” to distinguish it from other sweet potatoes. Today, the main commercial producers of sweet potatoes are China, Indonesia, Vietnam, Japan, India, and Uganda.