by Leon A. Frechette 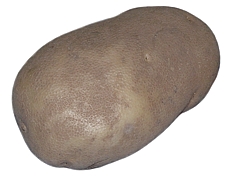 Just about any potato can be used for baking, but mature russet and/or Russet Burbank and King Edward are most commonly used. Their starch gives these potatoes their characteristic fluffy texture on the inside.

Look for potatoes with even brown-tone skins and no greenish cast, bruises, discolored spots, or sprouts. If you plan to bake several at one time, choose potatoes with uniform shapes and sizes so they cook evenly and get done at the same time.

Spud Spikes cut baking time up to 50 percent depending on the potato’s type and size and how many potatoes are being baked at the same time. They transfer heat to the center of the potato, thus decreasing overall baking time.

Along with Spud Spikes, consider using a grilling stone, flat on one side with ribs on the other or a raised vented pizza pan (holes in the pan). A grilling stone works great in both the oven and on the BBQ, especially to steam-bake potatoes or when the potato skins have been rubbed with butter or olive oil. The ribs help to evenly distribute heat and air and prevent formation of a hard spot, often found on potatoes baked directly on a sheet pan. In a BBQ, it will help prevent burning which could occur if the potatoes are in more direct contact with the flame. Even if potatoes sit on an open rack or on a broiler rack sitting on a sheet pan in an oven or BBQ, turn them to prevent grill mark formation. I make no exceptions here—potatoes also need to be turned even if they are baking on a ribbed grilling stone or raised pizza pan.

Finally, and because I like steam-baked potatoes, consider a clay baker which can be used in both the oven and on the BBQ and allows you to use Spud Spikes and cook other vegetables at the same time. It also eliminates the need to wrap potatoes. As with other baking methods, be sure to turn the potatoes while they bake.

Before you begin, what type of baked potato do you want? 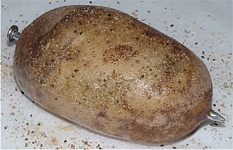 Basically you can bake potatoes in an oven or on the BBQ and on an open rack or on a broiler rack in a sheet pan or on a ribbed grilling stone placed on the oven rack for a crisper skin. You can also seal potatoes in a closed parchment paper pouch encased with aluminum foil or in a clay baker for a softer skin.

Rubbing butter or olive oil on the potato’s skin and sprinkling it with our Spud Spikes Gourmet Original Blend Potato Skin Rub and Everyday Seasoning will make the skin crispy; however, the butter or oil and seasonings will probably drip to the bottom of the stove or BBQ or burn onto the rack if the potato sits directly on a rack. It may even cause the potato to stick to the rack. Even if you are steam-baking wrapped potatoes, I recommend baking potatoes on a broiler rack sitting on a sheet pan or grilling stone (ribs pointing up) placed on the rack.

Before baking potatoes, rinse and scrub each potato’s skin under cold water using a potato brush. Do not use hot water as it will start the cooking process. Don’t soak the potatoes as it could make them soggy depending on how long they soak. With the tip of a knife remove any bruises, dark spots, and sprouts and rinse the potatoes again. Finally, dry each potato thoroughly with a clean towel.

Which is faster—gas or electric stove or BBQ?

These times and temperatures are without the aid of Spud Spikes potato nails, baking one to four 5-ounce potatoes on an open middle rack in the oven. For more than four potatoes, add 15 minutes to the time. Prick each potato an inch deep on each side three to four times with a fork to help release steam so the potato doesn’t explode.

A potato is done when the center reaches 210°F; check it with an instant-read thermometer. Alternatively, squeeze the center of the potato gently; if it’s done, the potato will yield to gentle pressure. If you use this method to gauge doneness, wear oven mitts so you don’t burn yourself!

Can you speed up the baking time on potatoes?

If you follow these simple steps, you’ll find that Spud Spikes reduce baking time up to 50 percent (translation: saves you money!) and you will enjoy evenly cooked potatoes.

First, preheat the oven to 325°F to 450°F (depending on the size and number of potatoes and the type of stove). Next, clean and dry the potato skins, prick the skins a few times with a fork (an inch deep), and insert a Spud Spike lengthwise in each potato. Finally, bake the potatoes on an open middle rack. They will be done in about 30 to 40 minutes (again, depending on the size and number of potatoes and stove you have). Be sure to turn the potatoes over halfway through the estimated baking time. This traditional baking method does not include any butter or oil and salt on the potato skins. 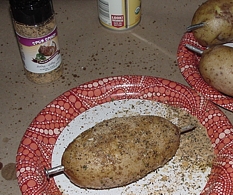 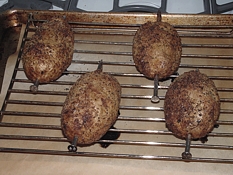 For extra crispy skins, use an oven mitt to remove the sheet pan with potatoes from the oven about 10 minutes before completion. Turn off the oven and turn on the broiler, setting it to the same temperature at which the oven was previously set. Now apply more butter or olive oil to the skins and sprinkle the potatoes again with our Spud Spikes Gourmet Original Blend Potato Skin Rub and Everyday Seasoning. Using stainless steel kitchen tongs, turn the potatoes over and do the same to the other side. Place the pan back into the oven. Remember to turn the potatoes a few times and watch them closely so the skin doesn’t burn under the boiler.

When you think the potatoes are done, check to see if you can remove the Spud Spikes without resistance by using an oven mitt and/or kitchen tongs. If they come out too fast, the potatoes may be overdone. With time and practice, you’ll learn how many potatoes you can cook, their sizes, and how long it will take. You’ll also know what baking method works best for you (i.e., conventional or convection oven or BBQ) and whether you prefer crispy or soft skin. 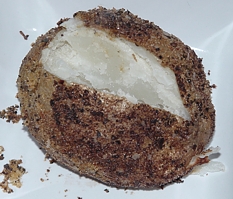 Depending on the variety of potato, you may get a “starchy nail,” i.e., some of the potato’s flesh will cling to the Spud Spike’s surface when you remove it. If you soak the Spud Spikes (head down) in a glass of water while enjoying dinner, they will be easy to clean.

Personally, after I’ve cut the potato lengthwise, i.e., in the same direction the Spud Spike was inserted, I don’t notice a weird hole in the potato after I remove the Spud Spike. If the hole bothers you, just remind yourself: the Spud Spike that created the hole has produced a delicious and completely cooked potato in less cooking time! I have never seen any unattractive and unappetizing dark marks in the potato’s flesh from Spud Spikes.

Other uses for Spud Spikes: 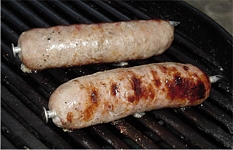 I also use Spud Spikes and our Spud Spikes Gourmet Potato Skin Rubs and Everyday Seasonings—Pepper, Original Blend, and Garlic to grill brats or sausages on the BBQ. The grilling time is reduced by 50 percent, and after the nail is removed, the brat or sausage remains straight, a bonus if you plan to eat it in a bun.

While everyone has a favorite method and technique, this is my take on baking a perfect potato and grilling brats or sausages. Food-grade stainless steel potato nails work great!

Safety:
This goes without saying, but I will say it anyway: protect your fingers, hands, and arms when working in and around an oven or BBQ, especially when removing a hot potato and/or hot Spud Spikes® potato nails. Use oven mitts or kitchen tongs when handling hot potatoes and/or hot Spud Spikes. Spud Spikes are sharp-pointed food utensils that requires care when handling, inserting, or if accidentally dropped. Never handle by the point, never have your hand in front of the point when inserting, and never attempt to catch the spike if it should fall. Spud Spikes are not designed for microwave use.

Disclaimer:
By using the information referenced therein, you agree to release and hold harmless C.R.S., Inc. and spudspikes.com, its officers, its employees, and the author from any liability. Any products, materials, procedures, and all information, advice, and instruction are given as general guidance only. All safety instructions on products should be followed. The material is distributed “as is”; no express or implied warranties of any kind are made, including, but not limited to, fitness for a particular purpose.